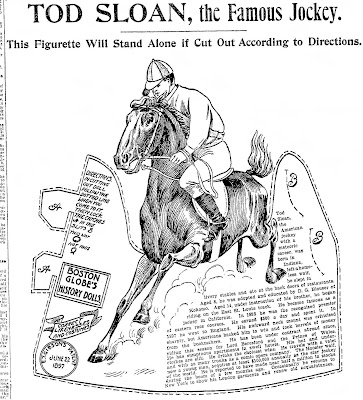 August 13, 1899. TOD SLOAN, the Famous Jockey. "Tod Sloan, the American jockey with a meteoric career, was born in Indiana, left a home-less waif, he slept in livery stables and ate at the back doors of restaurants. Aged 8, he was adopted and educated by D. G. Blouser of Kokomo. Aged 14, under instruction of his brother, he began riding on the East St. Louis track. He became famous as a jockey in California. In 1895 he was the recognized premier of eastern race courses. He earned $500 a day and spent it. In 1897 he went to England. His awkward neck mount was criticised sharply, but Americans backed him to win and took barrels of money from the bookmakers. He has been under contract abroad since, riding this season for Lord Beresford and the Prince of Wales. He has sumptuous apartments in swell hotels. His hat and under-clothes are silk. He drinks the choicest wine. He travels with a valet and with as many trunks as a comic opera company. The Hoosier waif, now a young man, acquires at least $100,000 annually as the star jockey of the world. He is reported to have made near half a million in stocks during the boom of a few months ago. Occasionally he returns to New York to show his London garments and renew old acquaintances." - - - -I don't think I like Tod Sloan.