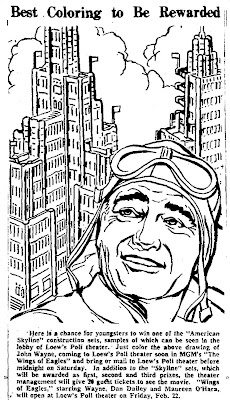 This newspaper coloring contest appeared in a newspaper on February 06, 1957. Winners of the contest received tickets to see the movie "Wings of Eagles" starring John Wayne, Dan Dailey and the lovely Maureen O'Hara. Hollywood could use a few good men like John Wayne instead of the little weasels that seem to inhabit the movie and television industry today.
Posted by Lucy at 2:54 PM