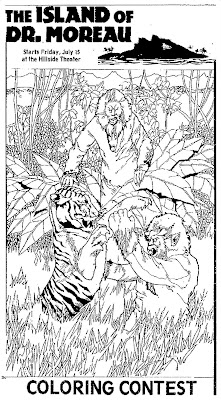 The newspaper coloring contest for the movie "The Island of Dr. Moreau" appeared in this newspaper in July of 1977. Winners of the contest received tickets to see the movie. The movie, based on the novel by H. G. Wells, starred Burt Lancaster, Michael York, Nigel Davenport, Barbara Carrera and Richard Basehart.